Spring sports are underway at Briarcliff High School, and teams are looking forward to winning seasons.

Varsity Boys Tennis: The boys’ tennis team this year is back with vengeance. They have a new head coach, Mr. Don Hamlin, and are aiming for a league championship this year. Senior Jacob Cooper notes that there are a lot of up-and-coming underclassman that will be assets this year. The tennis team only graduated one senior last year and therefore has an experienced group of players led by current seniors Jacob Cooper, Rishab Mittal, Aanand Patel, David Gold and Brandon Fuhr, ready to make a splash this season.

Varsity Softball: Briarcliff’s varsity softball team is looking to have a successful season. Senior Summer Horowitz hopes to end her high school career on a high note by making it to sectionals. Last year’s softball team graduated two seniors, and this year has a strong core of practiced upperclassman. Senior Sam Friedberg comments that “The team is made up of a fun group of athletes who are ready to work hard in order to win.”

Varsity Baseball: After varsity baseball’s trip to states last year, the current team is looking to have yet another outstanding season. Junior Kevin Louie reports “After accomplishing so much in the last two years, the baseball team has lost so many talented players. Some of those vacant spots have been filled by less experienced underclassman. Maintaining the same level of success of the past two years will be difficult, but we continue to look positively on our upcoming season, and plan to proceed one step at a time.” The baseball team has been working hard in practices and scrimmages in order to prepare for a season with high expectations.

Track and Field: Briarcliff’s track and field team has been practicing tirelessly in order to prepare for its upcoming spring meets. Both the girls and boys teams won in the first meet at Ossining. Junior and captain Sophie Feuer is proud of how hard the team has been working and hopes that both the boys and girls teams can win the League Championship this spring. Senior Madeline Zimmerman comments “this is one of the strongest track teams in Briarcliff history!” 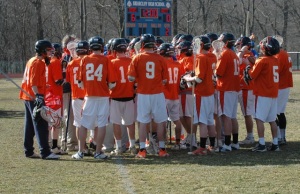 Varsity Boys Lacrosse: The boys lacrosse team is rejuvenated and ready to kick off a successful season. The defense is mostly experienced returning players and the offense has been enhanced by sophomores Danny Millner and Stefano Paone. Senior Austin Kopec notes “As long as we work together as a unified team then we will have a successful season.”

Varsity Golf: The varsity golf team is aiming to be a competitive team this spring. The team has been strong for the last couple years but graduated a talented bunch of seniors last season. Sophomore Harrison Moyle is looking to get to sectionals this year and proved himself last year as a starter. The rest of the starting lineup is new to competition. The team has been training hard and has a core group of upperclassman to help lead the team.

Varsity Girls’ Lacrosse: The varsity girls’ lacrosse team is looking to get off to a good start this season. The team is looking to again capture the league championship. The team acquired a few underclassmen who are sure to make a difference. Senior and captain Hannah Wexler notes that the team is very close and it is evident by their play on the field. Wexler adds “My goal this season would be to win a section title.” Wexler acknowledges that it might be difficult, but she is confident that the team has a solid chance.

Come out and support all of the Briarcliff spring sports teams this season!