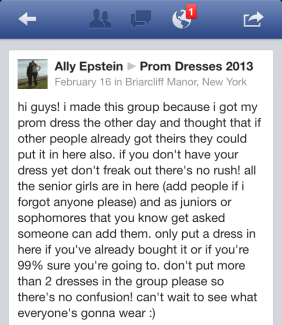 “OMG he is wearing the same tuxedo as me! This is a disaster!” is something that will never be said at the Briarcliff High School Senior Prom. Neither is “OMG, she is wearing the same dress as me! This is a disaster!” but for an entirely different reason. The former is due to a combination of facts that include 1) nobody notices which tuxedos look the same, 2) nobody cares and 3) no really, nobody cares. However, the latter is the sole result of the Facebook group “Prom Dresses 2013”, specifically designed to eliminate the horror, confrontations, and ultimately tears that result from wearing the same outfit as someone else on the most important day of a girl’s high school career.

Yet it is the unwritten rules that are to be most closely followed. If one person gets a dress and posts it first, she claims all rights to it; anyone else with the same dress must return hers. But with a group of 100+ girls, there are bound to be innocent misunderstandings and confusion. Is the same dress in a different color acceptable? (Still up in the air.) Can a girl exceed the limit and post four dresses if she really cannot decide between them all? (Apparently yes.) However, the many comments reading, “love this!” leave the misunderstandings and confusion forgotten. Validation oozes out of the page, along with sunshine and butterflies.

Despite the restored sense of community, there are still differing opinions on the value of the group itself. When asked her opinion of the group, senior Tamar Honig commented, “It’s like whatever. I mean it’s kind of stupid.” However, Taylor Talenti, also a senior, claims that the group is “very helpful and saves us a lot of drama from showing up on prom night with the same dress!” Clearly, for some, the internal drama on Facebook is worth the drama-free prom. And to be honest, I agree with both girls. Is the group a bit over the top? Maybe. But if it saves just one girl, or more likely two, from feeling embarrassed or frustrated on an important night, is it worth it? Yes.

Besides, in the end does it really matter what dress somebody wears? After all, everybody is only looking at the guys anyway.