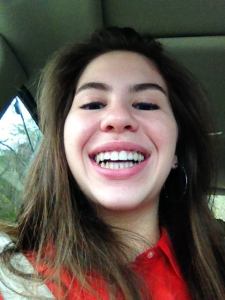 Sarah Goldstein had a hard time telling her friends about her injury. After all, her jaw was wired shut.

One Saturday in April, she took her usual position as goalie for her travel soccer team. Her opponents had a break away, and she watched as the ball came toward her. Sarah dove to catch it as an opposing player tried to kick it. Her face made contact with the powerful kick.

Sarah, who had previously broken her nose five months before, realized immediately that her jaw was broken, and she lay on the ground face down.

“I felt something in my mouth and spat it out. It was my teeth.”

At first, her teammates gathered around and tried to comfort her.

“They were like ‘It’s ok, you’re ok,’ and that’s when I spat out the teeth. Everyone freaked out,” she said. 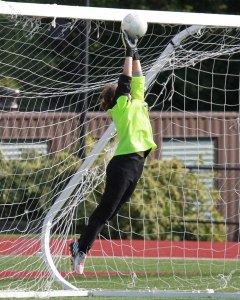 Sarah was immediately taken to the hospital. The incident occurred at around 3:00 PM, and she arrived at the hospital at 3:30, where a CAT scan revealed that she had indeed broken her jaw in two places and lost two teeth.

She spoke with an oral surgeon who gave her a choice. She could have surgery, which would mean getting titanium plates implanted into her jaw or her jaw could be wired shut and allowed to heal.

Sarah chose the latter. The procedure took place on the following Monday at 8:30 AM. She was given anesthesia and was unconscious until 4:30, when she woke up on a couch watching the movie Pitch Perfect with no idea how she got there. 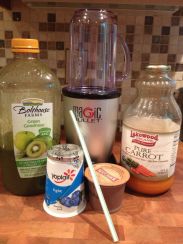 Having her jaw wired shut was a weird experience at first. She often tried to open it, forgetting her injury. For the first two weeks her jaw hurt, but she became accustomed to her condition.

She was confined to a diet made up of yogurt, pudding, smoothies, and microwaved pasta pureed in a blender.

Another frustrating part of her situation was having to listen to the same three questions over and again.

“How do you brush your teeth?”

After she switched to bands confining her jaw, which allowed her to talk more easily, she still couldn’t chew or eat “real people food,” she said.

She finally got the bands off on May 11, ending her weeks-long saga.

Sarah has some final advice from breaking her jaw: “Don’t break your jaw.”