The race to be the next Mayor of New York City is heating up. Due to the city’s

extremely Democratic nature, whomever wins the Democratic primary is likely to win the general election in November. This primary season has many candidates with the major ones being Eric Adams the Brooklyn Borough President, Shaun Donovan former Housing Secretary, Kathryn Garcia NYC Sanitation Head, Raymond McGuire Citigroup executive, Dianne Morales a non-profit CEO, Scott Stringer NYC Comptroller, Maya Wiley former member of de Blasio admin, and Andrew Yang who needs no introduction. These candidates can be broken down into three distinct groups: Raymond McGuire and Andrew Yang are running as moderate outsiders that want to change the way NYC politics works, Kathryn Garcia, Shaun Donovan and Eric Adams are running as traditional Democrats in the mold of Joe Biden or Hillary Clinton brining years of government service, with Scott Stringer, Maya Wiley and Dianne Morales all running as progressive hoping to change NYC both in economic and social ways.

Due to the unique nature of NYC election laws, candidates do not want to attack each other for fear of alienating their voters and risking not having them on successive rounds of the ranked choice voting process. Ranked choice voting is an instant runoff system where is no candidate wins an outright majority of votes, the person with the least votes gets eliminated and the individual voter’s second choice gets their votes. It forces candidates to appeal to a majority of the electorate rather than 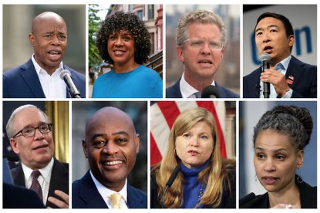 winning with in single digits which often could happen. Despite this, Andrew Yang has remained the consistent frontrunner in the polls winning both the first and final ranked choice voting rounds. Moreover, a recent debate impacted many candidates due to them guessing the median price of housing in Brooklyn incorrectly with Shaun Donovan and Raymond McGuire both guessing below $200,000, when the correct answer was $900,000, which Yang guessed, causing many candidates to receive backlash due to them seeming out of touch with the situation middle class New Yorkers. Another candidate is also in turmoil with the progressive front runner Scott Stringer being accused of a sexual assault allegation, causing him to lose all if not most of his progressive endorsements, with many choosing to endorse Mrs. Wiley or Ms. Morales.

Due to the crowded field anyone could win since recent polls in the election have been false. Yet, all the candidates are aware of Andrew Yang’s front runner status and little has been seen which can change that.